skip to main | skip to sidebar

The Gallery is open Tuesday - Friday at 11-18.00. Closed for Danish Holidays.
Come by and see exhibitions from outside.. and inside - 5 visitors at a time :-)
All days have room for Spring walks and window-watching in beautiful Nyboder. 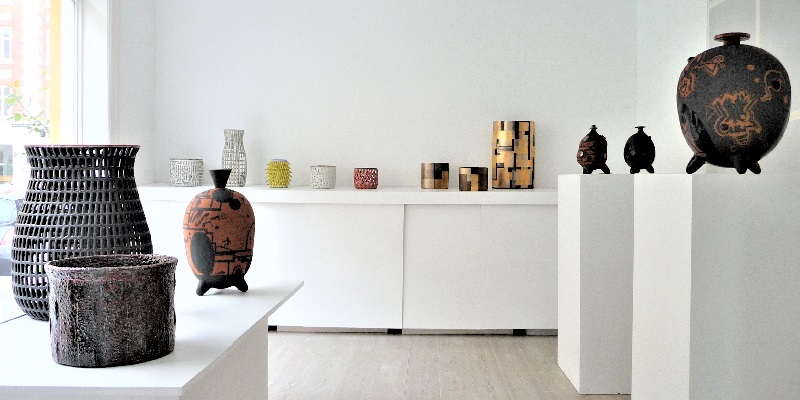 MASTERLY
Bente Hansen, Bodil Manz, Kim Holm, Malene Müllertz and Peder Rasmussen
Vessels in great shape.. Five Danish ceramic masters exhibit new work.
Vessels have an almost magical appeal for their essential form and unique potential in colour, decoration and texture.
It is a wonder when such a simple thing can be changed and changed forever.
A quite personal story often underlies each Vessel's expression.

FANCIES
Mona Vander and Jette Lövén Dall DK, Mayu Ueda JAPAN
Cultural contrasts, function and figurative with associations from a bygone era meet Japanese Contemporary.
The romantic kitschy and often banal innocent expression are brought together and turned upside down. Contrasts of traditional utility and sensitive thought-through come together. Fine delicate plays up to bleak surreal.
The pieces bring out smiles and act in its ingenuity fun figurative quirky.

Grateful thanks to The Danish Art Foundation for project funding in 2020.

BIOGRAPHIES and TEXTS – ALL EXHIBITORS:

BENTE HANSEN
The oval jars are either modelled or wheel-thrown and altered. The pots are glazed in different colours - and in a balance between form and faces transformed in a steady artistic searching process. By layer by layer application of coloured transfers, gold and silver, the ceramic colours are nuanced and changed in the firing, merged, blended and concealed or partially covering the underlying layers.
The motifs have appeared in a thoughtfully reflective work process and in the geometric design language can relate to both Bauhaus, Avantgarde art, architecture, collage and Japanese textiles.

BODIL MANZ
BODIL MANZ is acknowledged for her subtle, abstract decorations on paper-thin simple forms. A detailed examination of transparent cylindrical and geometric shapes with fine colourful graphic lines and planes transforms surface decoration into three-dimensional pieces. She masters the transformation of a geometric-abstract thoughts of mind from surface decoration to three-dimensional work, and constantly challenges herself and the viewer of her work.
Bodil Manz belongs to the international elite of ceramic artists represented in major museums and private collections worldwide. Her work is characterized by a continual exploration and experimental activity, that among many other projects have resulted in wall installations, sand-cast porcelain pieces and architectural sculptures.

KIM HOLM
Kim Holm's artistic strength is his ever renewing 're-invention' of the cylinder, the vessel is an individual piece every time he cuts into the surface, finds a decorative reference or glazes in several layers.
He is said to be stubborn, in the good persistent and inquisitive manner, - without compromises and easy solutions. Every form, every inch of the surface appears in a constant dialogue between ceramist and material. The form, the cylinder, the round or rounded jar, is a ceramic classic, that here wakes both recognition and surprise. With simple interventions, Kim Holm varies his theme, and no two jars are the same. Furthermore comes the glaze, that sometimes smoothly follows the form, other times runs, drips or crackles, and finally all the details combine in a clear symbiosis. www.kimholm.net

MALENE MÜLLERTZ
Müllertz's pieces hold a wealth of detail and finesse - only to be found in the best ceramics – where craft, material and technique are elevated to a higher realm. Work of this nature requires courage and persistence.
The pieces can be seen through, seen from the inside and the outside at the same time and thus experienced as if in constant motion. The cylinder reveals its sculptural properties in a harmonious balance and at the same time contains tension-filled interactions between the form, the ornamental detail of the surface and the qualities of materials. Technically, every work is a marvel of carefully thought out experiments and the courage to attempt an idea that is revealed in the final piece. She has succeeded in creating apparently simple, yet complicated, technical, poetic, contemporaneous works of art with a cultural narrative that shall go down in history as eternal.

PEDER RASMUSSEN
- about my new vessels
“My new jars continue where my previous exhibition at Ann Linnemann left off. It is relatively unconventional pottery - probably a little primitive.
All forms are modelled by hand - slightly asymmetrical. There is again only used one colour - a black slip right on red clay.
Occasionally I have used some glossy glaze to emphasize the shape or the visual points. In a single case, platinum lustre as complementary blankness.
The motifs are ornamental. Human figures, often in opaque activities, tumble around an enigmatic world. Ornaments - more or less recognizable signs and symbols - meet with other figurative elements such as birds or fish. ”

MONA VANDER
"My dishwasher holder is developed as a holder for cloth, sponge, brush - and anything the water can run off in. After some sketches and fun / strange attempts, I came up with the model I call # 1 (classic) and several models depending on the need and working temperament in the kitchen-dish-daily life :-)
I work primarily with ceramics for use. Not only must the functional items be beautiful/ fun, they should feel good in the hands and be practical and useful. It is the pottery and hands that decide. That is, I am not trying to force the clay to perfection. I am experimenting with lines, colours, dots, .. - and glaze as a mini-painting on hand-thrown porcelain and stoneware. Room for release and anti-minimalist, is a new and different side of my creative space. ”

JETTE LÖWÉN DALL
“The island - small worlds in a big world. Interest in landscapes and islands comes from travelling all over the world. I continue with my universe from: Princess of Keramos, but without the princess as the focus. The small landscapes are a little respite from reality. A small picture of a thought, a dream or a little story that might give a smile on the lip. The objects are made with different types of clay that are put together, and sometimes with glaze experiments in the form of shrubs and trees. I call them clay collages. Everything is being modelled. Nature is a huge inspiration; but the inspiration also comes from fairy tales and tales. Alice In Wonderland is one of the favourites, but also many others."

MAYU UEDA - JAPAN
”Watching the forest fires decimate the natural life in Australia makes one think, “what is mankind’s purpose on this planet?” Having grown up at the foot of a mountain, I have had a profound respect for nature; in the woods, I hear the whispers and groans of shape, color, sound, smell, sensation in the damp earth, giving life to green; the cold summer mountain streams water; the wind in the trees; the scent of new budding leaves. I even hear the voices of things being dug up from the fields.
I have made my art from “YAKIMONO,” possibly led by the “subconscious voice” of earth and flame. I make forms from the earth beneath my feet. Flames stimulate minerals to react, altering their density and color so that when cooled, they take a new eternal hue and form. It is being there in that moment that makes my heart race.
The serenity at the end of nature’s tumult is like the dreams we see to escape reality. As pink reflects the transience of the cherry blossom, the eroticism of erotica, the daintiness of Nadeshiko flowers, or the grotesqueness of raw meat, colors can reveal the heart and endow objects with warmth (strength).
My mind receives divine blessings and dons a sweet, dream-like world. As flames sublimate everything inside them, I make a small call in the sincere hope for peace on this Earth.” Mayu Ueda, Spring 2020. 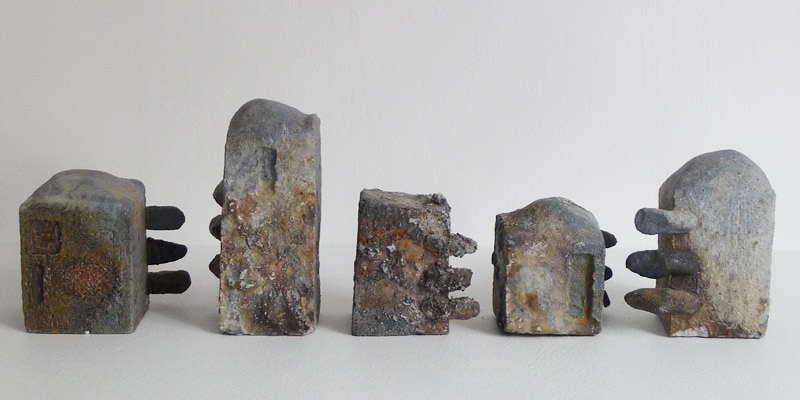 Unfortunately, it is still uncertain, when the new works by Mayu Ueda will arrive from Japan, but we are so fortunate to have a number of small wood-fired houses, which she made in Denmark some years ago.
These works are exhibited until the transport is open between countries again :-)

Ann Linnemann
I am a ceramic artist, potter and designer. In 1983, I completed a traditional four-year Danish apprenticeship in studio pottery at H. A. Kähler, DK. In 1998, I graduated as a ceramic designer from the Denmark Design Academy (now: KADK) in Copenhagen. Important influences in my work are travels and studio residencies in Japan, the USA at Archie Bray Foundation and Arizona State University, Canada at Banff Arts Center, China, Australia, South America, Egypt and Europe. I enjoy teaching and have developed a great interest in promoting ceramic art, collaboration projects and developing international relationships. In 2001-2007, I worked as the director of the International Ceramic Research Center - Guldagergaard in Denmark. In my studio, I design and produce hand-thrown series of functional tableware in porcelain, stoneware and earthenware. I also work with sculptural vessels embodied with elements of the human form and glaze painting. The sculptures reference my fascination with various cultures, the human body and mind. My studio and gallery is located in Copenhagen City. Ann Linnemann Gallery, Kronprinsessegade 51, 1306-K Copenhagen.